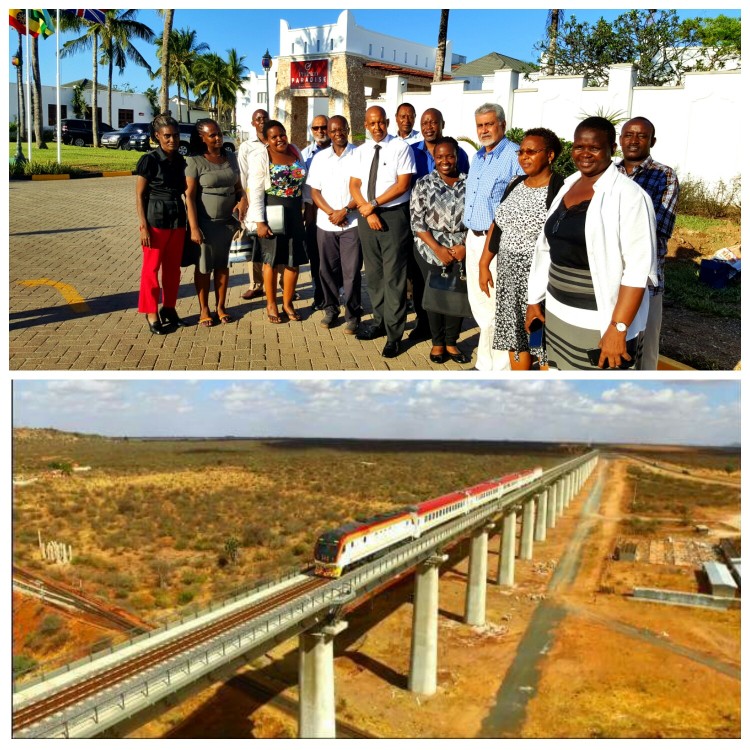 #WhyILoveKenya
This week as Kenya Coast Tourism Association  board  we met MD Kenya Railways Athanas Maina who gave a brief on Standard Gauge Railway .  He spoke for  90 minutes without any notes. We also had a very useful open Q&A.

Allow me to share some of the issues . I have managed to put together several points that I managed to pick from our discussion.

I will  refer  to them as the 20 things you need to know about the SGR.

1. While the distance length between Mombasa and Nairobi is 472kms the total track laid is 616kms to serve Station areas, workshops and marshalling yards with many passing stations.  We equally do not  have a single level crossing  like what we had on the old line . Ethiopia’s has many level crossing lines.  Level crossing is the cross sign where vehicles are stopped to allow the train  to pass.  The line is all suspended high up in populated areas hence the perceived high cost.

2. We discussed the issue of schedules and tariffs.  Both will soon be availed . As tourism players we shall play an active role to determine the schedules so that it fits with Jomo Kenyatta  International  Airport arrival schedules to allow connection to Mombasa . It will also be a game changer for domestic tourism.

3. At any one time they can move 1620 passengers.  Initially they only had an economy & first class. After we made a suggestion two months ago they have now  ordered two coaches with flat beds similar to an aircraft. We are honoured that our views count.

5. John Holland of Australia with CRBC  will operate the line including all the stations.

6. Passengers train will all be air conditioned and WiFi enabled.  This is cool . I have said it again and again , riding across Tsavo national park is taking a game drive on a train ticket. This is special.

7. There will be enough dinning and bar facilities on board the train.

8. The express train will only stop at Mtito Andei for few minutes.  Next stop will be Mombasa or Nairobi.

9. Our SGR has close to 40KM of raised super bridges some as high as 40 Metres like  in Tsavo to mitigate against accidents and wild animals underpass. In Nairobi  National Park the super bridge is anything between 8 to 41 metres.

10. The line is made up of heavy concrete slipers weighing 300KG  which helps to absorb the vibration etc. There is virtually no vibration reaching the ground to disturb the animals.

No shanties to be allowed around the stations hence County governments must support the project and zone the areas bordering the stations.

11. Naivasha inland container depot is NOT meant  to undermine Mombasa.  We have always had  Nairobi as a ICD . Naivasha is designated as a Export processing zone. Key hitch for Kenya to attract manufacturers is the cost of power. With next door Geothermal plant , electricity will be very cheap close to free which will be used to attract investors.

The zone is to produce goods for export including farm produce value addition like Tea etc.

12. The line will also extend to Kisumu then Malaba , Uganda will then connect from there. It is the dream and goals of EasternAfrica to be connected via train network.

13. Passengers train is an icing on the cake since the main goal is to move cargo saving our roads from damage and accidents.  The old line passenger line will cease while RVR  will continue to haul cargo and whoever wants to use then is free to do so.

14.They will soon advertise for services at the station including restaurants, shops etc . We cautioned them to stop any fake brand imitating an established international brands . A big NO to likes of Cossta  Coffee at JKIA.

15. All locomotives are brand new and non are refurbished. The locomotives  are all here and anyone who wants to inspect them is free to do so.

16. These type of locomotives are still being manufactured and China exports to many countries including Australia and USA.

17. Why China? The Exim  bank were the only guys ready to finance the project . The rest is just noise.  If anyone is ready to finance Naivasha to Malaba please let me know I link you up with Eng Maina. Fact is that others is just talk but no action to indeed finance the line . Chinese are financing very many projects around the world so we are NOT the only ones.

18. SGR will NOT use current Mombasa and  Nairobi Station . Mombasa station is at Miritini while Nairobi is at Syokimau  bordering the Nbi National Park. Future is to link up with an urban metro

19.The project will be delivered on 1st June to HE The President 18 months before schedule while they will take 5 months to run the line to check for faults and go full  commercial on 1st Dec 2017

20. A fam trip will be arranged to Nairobi  and return  same day. KCTA  will liase with KR. Express train will do 4 1/2 hours Nbi Mombasa.

As always I choose ro remain an optimist.